Twice a year all networkpartners of carpeDIEM are invited to meet at a partner institution for an exchange. On November 23, 2016 this meeting took place at GreenTEC Campus in Enge-Sande. 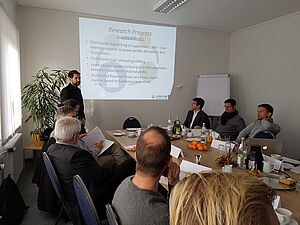 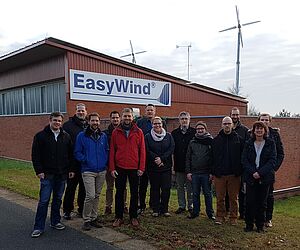 In a meeting of 5 hours Robert Brehm (SDU), Sönke Bohm (EUF), Oliver Witt (cbb) und Mareike Redder (WiE) gave an overview of the current status of the carpeDIEM project, new network partners were introduced and plans for the next half year were discussed. The meeting served as well to have a closer look at the facilities oft he GreenTEC Campus. For the discussion our future demonstration sites were the main issue. At these sites the technique of connecting local consumers and producers of energy will be tested.  At the moment three test sites are in planning, with places in Germany and Denmark. After the discussions followed a very interesting tour and introduction to the GreenTEC Campus by the director Marten Jensen which also brought us to the Offshore Trainingcenter that they house.

The municipality Enge-Sande is located in one of northern Germany’s biggest Wind farm areas with On- and Off-Shore windparks installed. Therefor the company Offtec on the campus works on the education, training, service and testing in the field of wind mills. They house a worldwide unique maritime trainingcenter to train and edjucate evacuation and rescue off shore.