The DIEM system is a versatile software and hardware framework, which consist of a hardware-, communication- and DIEM application layers. The framework is generic. This means that it can host a platform with miscellaneous distributed energy applications, e.g. to manage electric vehicle charging infrastructures or battery co-located photovoltaic panels. The system was validated in a laboratory setup with varying energy consumers and producers. Here the time response was determined and communication protocols have been optimised. 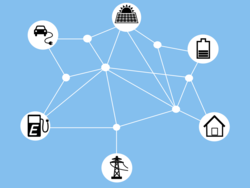 We designed the DIEM system as a decentralized distributed system. This means there is no central control instance, rather all individual system components share information among each other and coordinate energy flow to follow specific pre-determined objectives. These objectives can be to charge electric vehicles, so that primarily local energy resources are used, or the load to the supply grid is reduced at specific times of the day.

The advantage of a decentralized architecture is, that there exists no single point of failure and the system is easily scalable, so components can be added or removed.

Interaction with the hardware

The hardware layer provides the device level interface to control, e.g. the power flow from and to a storage device, control the maximum charge power for an EV or provide information from local PV panels. On top of the hardware layer, a middleware layer serves the communication and data handling for the distributed system. This  means it abstracts the distributed system, so that it occurs as a single coherent system to the user. The middleware layer for the system has been developed as part of the project and is available under the name: opcsa (Open Process Communication – Simplified Architecture).

In the DIEM application layer software can be implemented as if it would be operated on a central system.

In this application a photovoltaic (PV) system should be used as energy source for the charging of an electric vehicle (EV) fleet (fig.17). The time mismatch between the demand for charging the EVs and the energy generation from the PV system results in non-optimal self-consumption. A large share of the produced electricity is send to the overlaying  grid. Using the DIEM system to control the EV fleet charging and a co-located Vanadium redox flow battery (VRFB ), the self-consumption from the PV system can be maximized. Consequently, the need for additional power is minimised.

Role of the DIEM system

Allow all and confirm

Here you will find an overview of all cookies used. You can give your consent to entire categories or have further information displayed and thus select only certain cookies.

Saves your consent to using cookies and stores the chosen tracking optin settings.

This cookie is a standard session cookie from TYPO3. It stores the session ID in case of a user login. In this way, the logged-in user can be recognised and access to protected areas is granted.

Statistics Cookies collect information anonymously. This information helps us to understand how our visitors use our website.

This cookie is installed by Matomo Analytics. The cookie is used to store information about how visitors use a website and to help us compile an analysis report on how the website is performing. The information collected includes the number of visitors, the source from which it originates, and the pages in anonymous form.

In order for the maps of OpenStreetMap to be displayed on a website, the user's IP address is saved on an OpenStreetMap server and a cookie is set.

A direct connection to YouTube’s servers will not be established until you have activated videos autonomously at your end (i.e. given your consent pursuant to Art. 6 Sect. 1 lit. a GDPR). Once you have activated the service, YouTube will store your IP address. By loading the video, you agree to Google's privacy policy.

A direct connection to Google's servers is only established when you activate Google Calendar yourself (consent according to Art. 6 para. 1 lit. a DSGVO). After activation, Google Calendar will store your IP address. By loading the calendar, you accept Google's privacy policy.